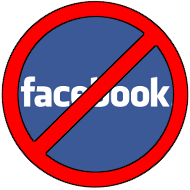 I quit Facebook on June 6, 2012. I picked D-Day because the term is commonly used to designate significant events and is easy to remember. Also, one summer day on the front porch drinking pitchers of gin gimlets, I can regale my grandchildren with some erratic, apocryphal tale of how my Facebook page was associated with the liberation of mainland Europe from Nazi occupation.

The reason I quit however, is not quite as tidy. Aside from it being the biggest time suck since gravity and affording its users the privacy rights of a Chinese prison, it appeared to me there was an even more sinister problem festering beneath the pokes and likes. What started as a simple, useful tool for sharing and connecting with friends had gradually morphed into the Facebook Industrial Complex. A giant, hulking, amoral, machine designed implicitly to generate revenue and vanquish competition. But that's any corporation. It's real drawback turned out to be surprisingly personal. Ironically, the social media oligarch's most tenacious and potent side effects were isolation and alienation.

The very friends I had signed up to connect with, I was no longer calling on the telephone. I never needed to have that sublime, Sunday afternoon catch-up with pals on opposite coasts. I already knew what was happening in their lives. In three minutes, I could see their new apartment with the sweet views of the Rockies, their new Jeep with pot leaf decals and custom snow shoe compartments and their latest suspiciously young girlfriends giving peace signs and making duck faces. I even tried making those calls, but there really wasn't much to talk about. We were all too informed.

Even worse, Facebook appeared to be quietly fostering an improvised bragging circus; each status update fertilizing a contemptuous breeding ground of envy and resent. Everyone just clawing and clambering over each other's keyboards to broadcast the latest ineffable highlight of their seemingly perfect lives.

"At Nobu with Pacino and DeNiro and they WONT STOP doing Godfather impressions, too funny!"

"Smokin' a J with Roger Waters inside the Great Pyramid of Giza. We just figured out the universe. So cool."

"Just got my dream job, and they're paying me twice what I asked. WTF! And I can work from my bed. And I just slept with your ex-girlfriend."

And of course, the pictures just added to the silent, self-effacing misery. Photographs of your plump, buttery lobster feast just plucked from the salty sea, splayed out on a picnic table at the private marina near the Maine cottage you're summering in. Snapshots of your daiquiri-filled coconut and tiny, twinkling toes framed by the impossibly turquoise water and white sands of the Virgin Islands. I am very happy life is constantly massaging you with sugar fairies and unicorn feathers; but its neither essential or healthy for me to see it. Any of it. Most of all your baby. And babies. And all of their preposterously hip baby names and minor achievements.

"Razor just turned on the iPad - with one finger!!"

"Sooooo tired today, Bumbershoot and Gatsby kept me up all night crying. And I forgot my Nespresso machine at our shore house!"

"Today is Wilhelmina Zenobia's first day of organic kindergarten! Wish her good fortune!! (we don't say luck in this family because it's roots are in Mayan sorcery and demon magic)"

I can't even keep writing this. Its making me upset all over again. So you get the point. For me at least, Facebook was fun, until I realized it was undermining my sensibility and peace of mind. And I cant imagine I'm alone. I knew the decision to leave was right when writing my farewell status update, I unveiled a visceral moment of clarity. I remembered that the following week I had first row tickets to a Radiohead show. I paused and earnestly considered postponing my exit until after I could post a bombastic photo album of Thom Yorke doing his little dances above my face. Fortunately, within the same flawed thought, I recognized that hubris as the very contagion I was trying so desperately to avoid. Within minutes I was off the grid.

Looking back now, I can't say that I ever hated Facebook, only how it made me feel. For most people, its probably a great diversion. Unfortunately, I couldn't help get pulled under by its current of pretense and delusion. Like an alcoholic I wish I could of used it responsibly. Grateful, satisfied, and free is how I feel today. I have a lot of extra time, much less antipathy and many more conversations. Perhaps one day I shall return briefly, for a single weekend, maybe around Christmas. I'll drop in uninvited to everyone's space like Santa, post a few unsolicited nuggets of wisdom and observation and then slip away and deactivate into the night.

Keep the flue open for me.